After giving myself a couple of days to let things begin to sink in I have decided to share the blog that I wrote on my final day of active treatment.

Today is the 8th November. Today is the day that I can officially write the following sentence…I have now completed active treatment for Stage 3 Ovarian Cancer! As I write this I’m smiling, crying, feel overjoyed, terrified, relieved and very emotional. I’m also feeling very full because tonight we celebrated with pizza and a giant chocolate cake. I was even allowed to eat my favourite pizza with minimal mocking from my family about how pineapple should never be on pizza…It’s delicious, don’t judge until you’ve tried.

Over the past few weeks and especially this week, I’ve been thinking back to a year ago when I started Avastin maintenance treatment. On 7th November 2016, after 18 weeks of chemotherapy and major surgery my oncologist told me that I was in ‘complete remission.’ My dad and I left the consulting room and went straight up to the day ward for my first dose Avastin. It ended up being an especially long treatment day because I also needed an IV of magnesium. I’m not sure my dad and I spoke to each other much that afternoon because I think we were both very much in a daze. I know I was. Then my new routine of three-weekly Avastin began and that’s what I’ve been doing for the past year. It was incredibly hard to adjust to because up until then I was used to being at the hospital every Monday for chemo, which meant that I got to have my blood markers done, see the team and feel very reassured. I really didn’t want to loosen my grip on my safety blanket. On 8th November 2017, I had my last Avastin and coincidently found myself sitting in the same chemo chair (number 20) I had my first chemo session a few days after I was diagnosed. As we left the ward I felt overcome with emotion. When I looked back at the empty chair my mind was spinning. I thought to myself. Will Cyril stay away? Will I ever need more treatment again? I know these questions, worries and fears so well now. 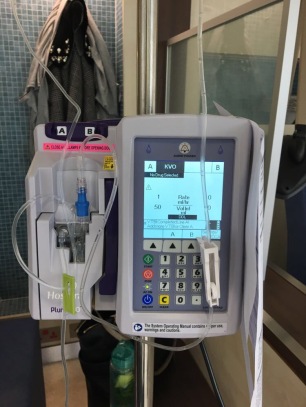 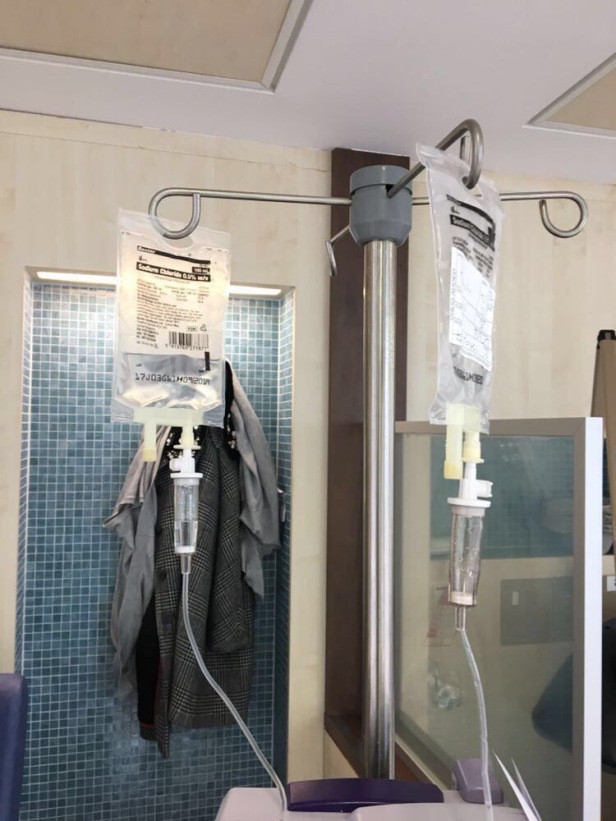 About halfway through my Avastin journey I had what felt like a big bump in the road. My CA125 (the blood marker that’s used for ovarian cancer) went from 12 to 24. A CA125 of 35 or under is considered normal, so although mine was very much still in normal range I panicked. I was always told that markers are never a certainty and to not place too much focus on them, but that’s not always easy because markers become the one thing that is fixed in a very unclear situation. I remember how terrible I felt and all the horrible thoughts that occupied my mind. I found myself thinking and reflecting about what I had been through. For the first time since my diagnosis, I found myself thinking about just how different things could have been. It was also in part because of my worries about Avastin ending and ultimately my fear of Cyril coming back.

I would love to say that this is something I can learn to not be affected by but the truth is I can’t. I know that these worries will always be there, and I can’t stop that. However, I have to learn ways to try to accept and deal with them, which I know is going to take time. One of the ways that I’ve been trying to do that is by trying to become friends with my anxiety. She is a shark called Jaws.

Avastin has not been easy this year. It’s not exactly a chemotherapy drug so the side effects are overall less intense but there are side effects for sure. There’s been the continuous body ache, headaches and random bouts of nausea. It’s hard to get used to having these for a year, but when you know that you are being injected with something that is helping to make extra sure that Cyril does not creep back in, it becomes easier to put your arm out for the cannula each time. And over time you learn to cope with the side effects. Now that I’ve finished Avastin, these should stop for the most part, but the added question mark is how much was due to side-effects and how much is due to menopause which can also cause headaches and joint pain along with a whole host of other things. So now we wait to see.

I am obviously overjoyed to be a step further along now, and I’m sure my veins are eternally grateful for the chance to be left alone for longer than 3 weeks at a time. If I’m being honest, at the moment it feels like follow up will be harder than active treatment. I think this is because when you go through the treatment you are in survival mode and not really thinking about what’s going on. For me, this kept Jaws on lockdown to a certain extent. Post treatment and follow up means I’m further away from the war zone I was in, so Jaws feels like she can break free, circle round me as much as she wants and make me feel more vulnerable. I know that help is always there when I need it, but as I start to get my head around 3 month rather than 3 week check-ups, Jaws is finding it much easier to give her two-cents about the current situation. Here’s what she tells me:

“Three months is a long time to go without seeing a doctor Laura.”

“Lumps and bumps you find along the way might mean Cyril is back.”

“Breast checks and ovarian checks for you every three months.”

“You might have an ovarian cancer relapse. This could impact when you get to have your preventive breast surgery.”

“You might even get breast cancer before you can have preventive surgery. The risk from your BRCA gene mutation is still there.”

Of all these, the only one I actually want her to remind me of is number two. She’s correct in saying that lumps and bumps need to be checked out and I’m actually thankful that she reminds me to be vigilant. After all, Jaws helped me last year because when doctors told me nothing was wrong, she pushed me to not accept what I was being told. Anxiety is not always negative. As for the other points they are all true. And they are not things I can tell myself to not think about because that’s an impossible ask. But what I do need to do is find a way to not get caught up in them, and to remember that I know a lot more about cancer and my body than Jaws does. I also know that close monitoring and support from the Marsden is going to help me adjust to this new phase of the journey. 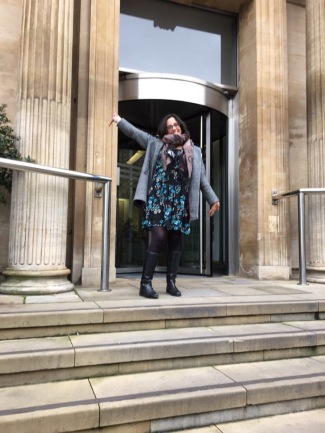 However, sometimes it’s not as easy as reminding yourself of the facts. For example, last weekend I found what I know looked like a boil near my scar. Panic quickly set in and I told myself the following facts on repeat:

“It’s just a boil. You’ve had loads before. It looks and feels like a boil. IT MUST BE A BOIL!”

But as much as I told myself these things, I quickly worried that it was a cancer related lump. It’s not just the thoughts that are a problem; it’s also a physically exhausting pattern of thinking. It had me lying on the sofa too tired to talk in no time. Cancer can make you lose faith in your body and it takes time for that faith to be rebuilt. In time I’m sure that Jaws and I will learn that it’s always best to get lumps and bumps checked out, BUT that there will be lots of times where these lumps and bumps are just normal lumps and bumps of life and not cancer related. I can’t guarantee this will always work but it’s a start.

I titled this blog ‘One very long tube journey’ for a reason. Since my diagnosis last June I have made the same trip on the Northern and Piccadilly lines to South Kensington station so many times I couldn’t begin to count. When you sit on a train, and the same train lines for as many hours as I have over the past 18 months you hear, “The next station is” so many times that you can replicate every the voice perfectly. You also get to know the length of time between each station and the points in the track that bump or curve. I can even tell you that the bumpiest part is between the Knightsbridge and South Kensington stops. Remember this next time you’re going that way and see for yourself!

Battling Cyril is not all that dissimilar to a very long tube journey in London with lots of stop along the way. For those of you who know the tube, it’s rare that you only ever need to take one line to get to your destination. For a year and a half I’ve been on the ‘treatment line,’ getting off at regular stops along the way. This week, I came to the end of this line, and I had to walk to another platform and wait to board the ‘Life after cancer’ line. Getting off the treatment train at the final stop was really hard, but I managed to get myself on the ‘Life after cancer’ train.

How does it feel? Well I feel relieved, thankful, elated, very fearful and very emotional. I have no doubt it will be a bumpy ride at times, but I know I have people to help. This train feels better in some ways because I get to have a seat rather than stand up and hold on for dear life. I can use my hands to do other things now. Like keep writing my long list of the things I want and need to do as a stage three ovarian cancer survivor. When I look at this list I often find myself hesitant to start working through it because it terrifies me that I might start and then have things ripped away from me again. The fear of needing to swap back to the treatment train is real and it’s not going anywhere. I just have to learn to deal with it, and I know that Jaws has to come along for the ride. For now I’m just going to take it one stop at a time and deal with whatever this train brings. I’ll learn as I go. That’s the best thing I can do. There’s no manual for being on the ‘life after cancer’ train.

Laura is a 27 year old primary school teacher living in London. She was recently diagnosed with ovarian cancer. She wants to raise awareness among young women about the BRCA 1 mutation and her type of cancer through articles, pictures and anecdotes.